Before we can talk about ornamentation, it’s important to understand the dynamics of a note as it comes out of the flute. Starting from this point will allow us to better understand how the various ornamentation techniques work to modify the life of a note.
Just like our lives have a beginning, middle and an end, each note lives its life in the same way. There are some simple terms that describe the different periods of a note’s life (see Figure 1). The initial part of a note’s life is called the Attack; this period is from the point at which you start blowing until the note reaches full volume. The middle part of the note’s life is called the Sustain and this lasts from the end of the attack, until the beginning of the last part of the note that is called the Decay. The Decay is the period in which the note drops in volume until the sound stops. The Decay can anything from a long, slow decrease in volume to a very quick drop (or stopping) of the sound. Many times, the Sustain and Decay will overlap and it may be difficult to define the exact transition from Sustain to the Decay. We'll use these terms to help define the different ornamentation techniques that make this instrument produce such beautiful music. 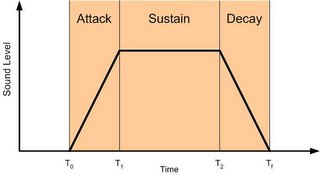 Sustaining a note
The length of the note is simply controlled by how long you blow the note. It starts from the beginning of the attack until the end of the decay. Blow for a short time and you have a short note, blow for a long time and you have long note. Don’t forget that the length of the note is the one of the most important variables that you have in composing interesting music.

Volume Control
The volume of the note is controlled by how hard you blow into the flute. Blow hard and the note will be loud. Blow soft and the note will be quiet. If you blow too hard, you will likely produce a high-pitched squeal, this is called overblowing (we'll take about Overblowing in a future post) and is not desirable unless you do it on purpose.

This Playing Tip is licensed under a Creative Commons Attribution-NonCommercial-ShareAlike 2.5 License.

How To Articles - Learn to Play the Flute!

Blogroll - Other blogs of interest

What I'm Listening to on Pandora Radio